Banking on a future for posts? (Research Paper) 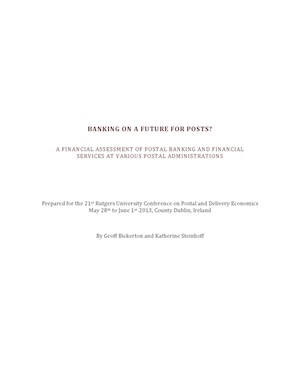 Prepared for the 21st Rutgers University Conference on Postal and Delivery Economics
May 28th to June 1st, 2013, County Dublin, Ireland
By Geoff Bickerton and Katherine Steinhoff

Post offices around the world face significant financial challenges due to economic recession, electronic diversion and increased competition. On the one hand, these challenges have led to falling mail volumes, which have weakened the economic viability of many postal administrations. On the other hand, they have spurred some administrations to bolster, innovate and expand services in an attempt to improve their economic viability. This paper looks at efforts in respect to banking and financial services.

These services have received little attention in postal economics literature. But scrutiny has increased in recent years as lettermail revenues have decreased and revenues flowing from financial and banking services have increased. This paper aims at adding to the analysis of papers by Luisa Anderloni and Odile Pilley on European post offices in financial services (1999), the World Bank on postal networks and access to financial services (2006), Neil Anderson and James W. Sauber on post offices and remittances (2009), Jose Anson and Joelle Toledano on postal finance and lessons from developed and developing countries (2010), and Marie Odile Pilley and Gonzales d'Alcantara on postal financial service economics and regulation (2010). The paper also aims at contributing to the ongoing debate about what kind of services Canada Post Corporation should be providing and what role the corporation should play in future.

The paper provides six case studies describing the models of banking and financial services provided by postal administrations in Brazil, France, India, Italy, Switzerland and the United Kingdom. It also examines, where possible and to the extent possible, how these services have contributed to the economic situation of the aforementioned postal administrations.

In addition, the paper explores the potential for expanding financial services and introducing banking services at Canada's post office. It provides a summary of problems in the financial and banking industry as well as an overview of demands for change and support for postal banking. The paper looks at past and current arrangements between Canada Post Corporation and banks and financial institutions, and considers circumstances that might allow the corporation to expand its involvement.