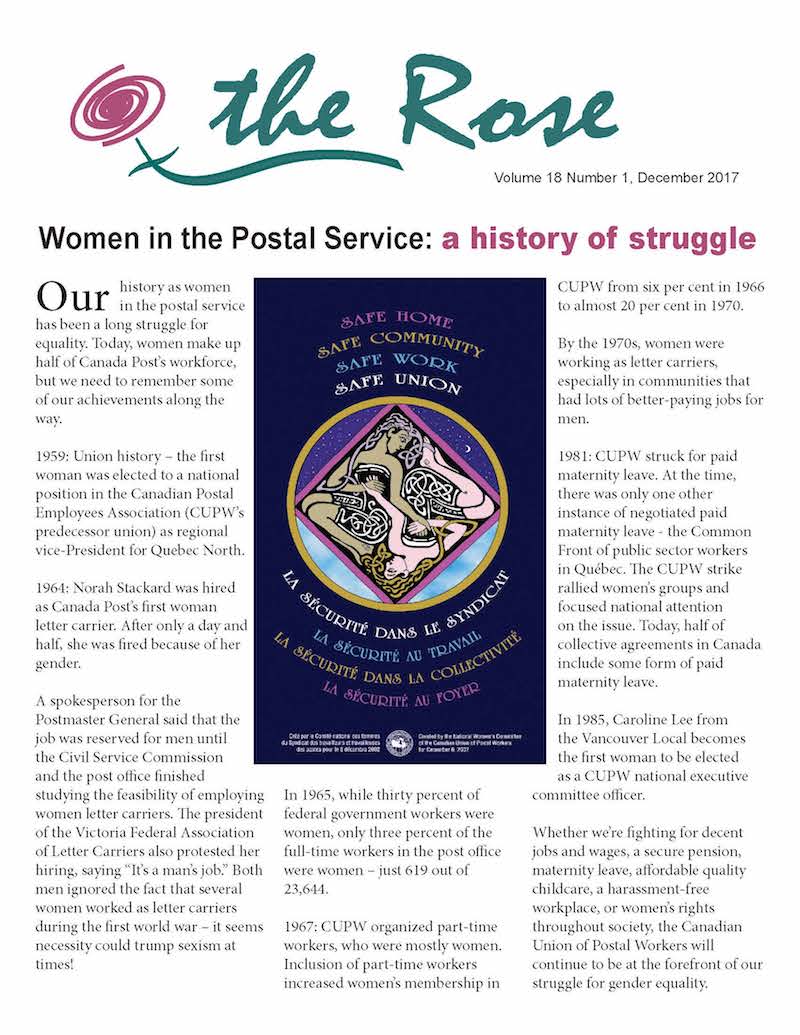 Women in the Postal Service: a history of struggle

Our history as women in the postal service has been a long struggle for equality. Today, women make up half of Canada Post’s workforce, but we need to remember some of our achievements along the way.

1959: Union history – the first woman was elected to a national position in the Canadian Postal Employees Association (CUPW’s predecessor union) as regional vice-President for Quebec North.

1964: Norah Stackard was hired as Canada Post’s first woman letter carrier. After only a day and half, she was fired because of her gender.

A spokesperson for the Postmaster General said that the job was reserved for men until the Civil Service Commission and the post office finished studying the feasibility of employing women letter carriers. The president of the Victoria Federal Association of Letter Carriers also protested her hiring, saying “It’s a man’s job.” Both men ignored the fact that several women worked as letter carriers during the first world war – it seems necessity could trump sexism at times!

In 1965, while thirty percent of federal government workers were women, only three percent of the full-time workers in the post office were women – just 619 out of 23,644.

By the 1970s, women were working as letter carriers, especially in communities that had lots of better-paying jobs for men.

In 1985, Caroline Lee from the Vancouver Local becomes the first woman to be elected as a CUPW national executive committee officer.

Whether we’re fighting for decent jobs and wages, a secure pension, maternity leave, affordable quality childcare, a harassment-free workplace, or women’s rights throughout society, the Canadian Union of Postal Workers will continue to be at the forefront of our struggle for gender equality.

The Roots—and the Future—of Pay Equity

In 2016, coming out of our bargaining mediation, CUPW and Canada Post agreed to a pay equity process for RSMCs that is currently unfolding. We’re proud of this commitment by employer and union to respect the principles of the Canadian Human Rights Act.

But how did we reach the point where we needed a brokered deal with our employer to respect the law of the land? To see how sex discrimination and inequitable pay came about, and continue today, it can help to look back at the sexist history of jobs and wages.

Our society is built on a patriarchal value system: Men have been valued largely as providers for their family, while women have been expected to look after the home and the children. What was considered “men’s” work was given greater monetary value than “women’s” work, as men were entitled to make the family’s spending and investment decisions. Over time, this increasingly disenfranchised women, made women subject to men’s power, and devalued the work traditionally associated with women and the home.

Women and Men in Competition

When workers have been divided along gender lines, it benefits our employers. This division is supported by perceptions that women don’t work as hard as men, or are less capable or intelligent, and therefore should be paid less.

Women were not part of the wage-paying job market until the First World War left a huge shortage of workers at home. Women had to take over the work to produce essential goods, but did so at a lower wage. When men returned to the job market after the war, they faced competition from women and their lower salaries.

In 1919, the Quebec government adopted a Minimum Wage Act for women – not to protect women’s rights, but to ensure they would continue to earn less than men. Remember, women still were not considered persons under the law until1929.

Job evaluation methods started to take shape in1930. The job market then was mostly made up of men, so men took charge of the job evaluation work. Male-dominated jobs were over-assessed, while female jobs and their characteristics were ignored or underestimated.

Women only gained access to the same education as men in 1964. Prior to that, they only had access to training for “women’s” jobs, such as teaching or nursing. In the 1960s, the world began adopting legislation demanding equal pay for work of equal value and protecting labour rights equally for women as for men.

In 1977, the Canadian Human Rights Act was adopted. Section 11 of the Act prohibits the discriminatory practice of maintaining differences in wages between male and female employees who are performing work of equal value. But to resolve the discrimination, we had to use our collective bargaining process, as many unions have had to do. It’s too slow, and it unfairly places the burden to correct the discrimination on the women workers who are being discriminated against.

In 2018, the Trudeau government plans to introduce legislation requiring employers under federal jurisdiction to enforce pay equity between men and women.

This legislation would take a proactive approach to pay equity — helping employers abide by the law instead of leaving it up to workers to file complaints about their pay.

Sisters at the Bargaining Table

The pay equity process wraps up in the spring, but a lot will remain to be done.

For the very first time, a woman is the chief negotiator of the RSMC bargaining unit. Moreover, six of the ten members of our national negotiating committee, and for the first time we have a Chief negotiator who is an RSMC sister. These are strong and dedicated sisters who are committed to gain equal working conditions for the women we represent. Uniting the RSMC and Urban bargaining units – a significant focus of negotiations – will be a big step toward full equity.

Needed: Maternity Leave and Childcare Options that Work for Families

The Liberals talked a good talk during the 2015 federal election campaign, promising to improve Employment Insurance (EI) Maternity/Parental leave benefits if elected. In October 2016 they consulted stakeholders on two options:

to extend combined maternity/parental benefits and unpaid leaves from 12 to 18 months – spreading out the same total benefits over 18 months rather than 12, or to take the current EI amounts in smaller blocks of time totalling 12 months over an 18-month period.

In other words, the same monetary benefit, with more flexibility on when to collect it. The 2017 Federal Budget paved the way for these options. But will they really help? Many wouldsay no.

In fact, these changes in fact primarily benefit higher-income two-parent families – the ones who can better afford to lose one-third of their income for 18 months. What about the rest of us? Instead of addressing current gaops in the system, these changes arguably reinforce or worsen existing inequities.

Current EI maternity/parental benefits are less than adequate, and maintain inequities between women and men, between different classes of workers, and between high and low-income earners. At the low level of 55% of income, Women’s average EI benefit in 2015 was only $398 per week (for men it was $457). And far too many workers don’t qualify. Only 34% of unemployed women, compared to 48% of unemployed men, can access EI benefits. The changes above do nothing to rectify these inequities.

Meanwhile the Liberals talk a lot about the importance of research for developing good “evidence-based” public policy. Where’s the research behind this policy change? The reality is that little research has been done in this area in Canada. So it’s hard to develop real solutions to improve paid maternity/parental leave, or to understand it as part of a broader family policy.

We need more and better research. Let’s learn what other countries have done to better align and integrate paid maternity and parental leave with accessible quality childcare – another piece of the pre-school childcare puzzle. We should look for policies that benefit all families, no matter their circumstance. We need genuine public consultation on what families need to better support them to work while raising their children. And we need to ensure that any new policy initiatives eliminate inequities rather than make them worse.

Bill 62 Opposed in and outside Quebec

Bill 62 is an act of the Quebec provincial government passed this October 18. Its title implies that its purpose is to preserve a secular state with religious neutrality. But one part of the Act states that people must uncover their faces to receive or provide public services. As soon as it was proposed, many in Quebec and across the country saw that the law would promote discrimination, including sexism, and began to challenge it.

Critics recognize that while the law doesn’t say it targets women wearing the niqab, women and Muslims are disproportionately affected, and the law would horbour sexism and make public space more hostile to women and Muslims. It would arguably apply to many things including boarding a municipal bus, or attending publicly-funded education, among other services to which our rights are not to be restricted based on religion or gender.

It appears, as we write this article, that it will be mainly up to civil society and the courts to prevent such discrimination.

Municipalities and other governments

The Union des municipalités du Québec, an association representing most cities in Quebec, said that rather than promoting social harmony, the law would put municipal workers in an untenable position. Outgoing Montreal Mayor Denis Coderre agreed, saying he didn’t see how the law could be applied. Current Mayor Plante says that it is out of touch with Montrealers’ reality.

Elsewhere in the country, reactions have been just as negative. Ontario’s legislative assembly unanimously denounced the act as an infringement on human rights, saying this type of legislation only drives wedges into society.

Justin Trudeau said that “if you want to prevent women from being forced to wear a veil, maybe you don’t want to be a society that forces women not to wear a veil.” Trudeau has opened the door to a possible challenge in order to protect minority rights, but said so far that the federal govermment is studying its options.

On November 7, the National Council of Canadian Muslims and the Canadian Civil Liberties Association filed a filed a lawsuit in Quebec Superior Court challenging the constitutionality of Bill 62.

The lawsuit asks for a court order to stay the application of the section that requires individuals to uncover their faces in order to provide or receive public services. It argues this requirement is discriminatory against those Muslim women who veil their faces, based on both their religion and their gender.