They Go Up So Fast 2015: Child Care Fees in Canadian Cities 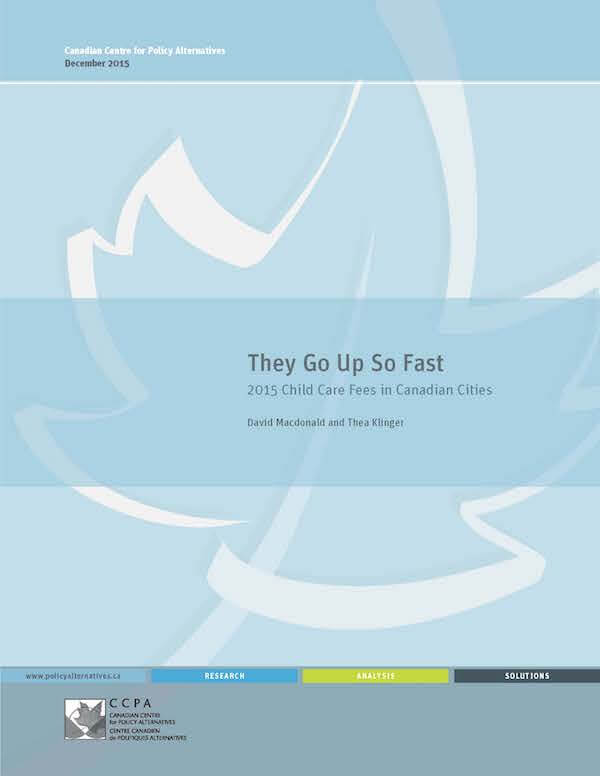 Child care was a central theme in the recent federal election. Federal parties competed with each other to present their solutions to the problems facing parents of young children. Significant among those problems is the high cost of child care in many cities. This report surveys fees for three age categories of child care (infants, toddlers, and preschoolers) in 27 Canadian cities, and the different subsidization regimes that reduce fees for low-income families.

In the highest fee city of Toronto, it is normal for a couple with two children under five to pay $28,300 in annual child care fees.1 That is the equivalent of 48% of the median family after-tax income in that city, but high costs are just part of the challenge. Even where families can afford to pay this much for child care they will often face long waiting lists due to significant shortfalls in available regulated spaces.

Regulations related to the quality and safety of child care also determine to a significant degree what the service will cost, with staffing playing an important role. That's not to say wages are too high. Child care workers earn some of the lowest wages of any occupation, with early child care educators who work full time earning, on average, just over $25,000 a year, and full-time home care workers earning just over $18,000 a year. Without additional government subsidies, it is unlikely that child care fees will drop or that child care centres will find it practical to expand the number of spaces they provide. Due largely to different provincial subsidy schemes, dramatic differences exist between Canadian cities in terms of the fees that parents pay for child care.

In all three age categories, Toronto had the highest median child care fees of the 27 cities surveyed. Fees were lowest across all age categories in the cities of Gatineau, Laval, Montreal, Longueuil, and Quebec City, since the Quebec government caps fees and subsidizes the difference in costs. Manitoba and Prince Edward Island have also capped fees but at higher levels. For infants under 18 months the highest median full-day fee in Toronto resulted in a monthly cost of $1,736, with the second highest fee in St. John's, Newfoundland producing a $1,400 monthly bill for parents. Both Markham and Vaughan (in Ontario) had infant child care fees above $1,300 a month. At $174 a month, parents with infants in child care in the four Quebec cities surveyed paid fees 10 times lower than what the same service would cost in Toronto.

Child care for toddlers aged 1.5 to three years was also most expensive in Toronto where the median full-day fee produced a monthly bill of $1,325. The next highest fees were in Ottawa, at $1,194 per month, and Vancouver where they are $1,180 per month. Quebec's flat rate of $174 a month for toddlers is roughly eight times less than the going Toronto rate.

For preschoolers aged three to five, the highest median full-day fee ($1,033 a month) was again found in Toronto. However, in this category most Ontario cities had similar rates (e.g., $1,000 per month in Markham, $987 in Ottawa, $981 in Vaughan, $977 in Brampton and Mississauga, and $970 in London). Once again, Quebec had the lowest preschooler fees of all provinces, at a flat $174 per month, which in this age category produced child care costs that were six times less than what parents paid in Toronto.

Since last year — the first year in which the CCPA compared child care costs in cities across Canada — fees have increased by 5% on average, or five times the rate of inflation. Child care fees in the Quebec cities surveyed have gone up 14% ($22 on average per month) during this time due to the introduction in 2015 of a scheme more geared to income. The largest dollar increase occurred in Toronto where fees are up 5% ($56 a month) since last year. London has also seen a 5% increase in fees, while Kitchener and Windsor saw noticeable decreases in their fees of 3% compared to 2014. Child care subsidies for low-income families are provided in all provinces except Quebec where fees are capped at a low level for everyone. These subsidies can substantially reduce the amounts that families pay for child care spaces.

For example, for a family making $30,400 annually (the median income for a family with children living in poverty), subsidized preschooler child care fees were $87 a month in Ontario cities (the lowest), followed by $105 a month in St. John's. The highest subsidized fees for this family income group are found in Saskatoon ($450 a month) and Calgary ($396 a month). Both Halifax and Regina have subsidized fees of over $350 a month. In some cases, as in Ontario, just because a family qualifies for the subsidized fee does not guarantee they will receive it.

Overall, child care costs for middle class families are lowest where the provinces have regulated fees and made up the difference through provincial core funding to services. This has led to huge variations in the cost of child care between Canadian cities, which verges on the absurd when you compare the $987 per month Ottawa parents pay for a preschool space that costs just $174 per month across the river in Gatineau.

Correcting these imbalances, by encouraging the creation of close to a million new child care spaces and increasing government subsidies, could benefit from federal leadership and co-ordination.