Save Canada Post » Demonstration at the Office of MP Denis Lebel

Demonstration at the Office of MP Denis Lebel 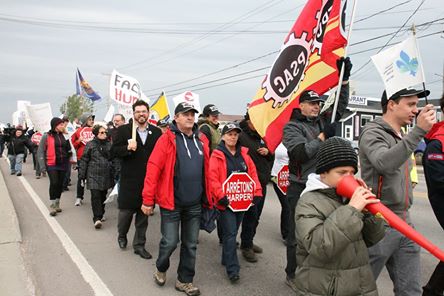 On September 20th, members from across the province demonstrated at the office of Conservative MP Denis Lebel. A week earlier, Lebel complained to the press about the plan to march in front of his residence, claiming this would invade his privacy. Therefore, workers marched silently by his residence as a mark of respect for all postal workers who have lost their jobs under the Harper government. They carried signs with messages such as “Silently remembering the unemployed,” “Quietly waiting for this government to go in 2015,” and “Quietly protesting service cuts.”