We’re on the road again in Southern Ontario before heading to Quebec for the last leg of the election campaign. Southern Ontario contains a large number of Tory seats that could be considered vulnerable and our goal has been to show up in those communities, talk to members and help fuel the resistance to the Conservatives’ job-killing, service-starving agenda everywhere we go.

We began by travelling to Toronto for the RSMC ratification vote for our program of  bargaining demands. We started our meeting by introducing the campaign and talking about what we are currently doing for the federal election. Everybody knows that if the Tories win, our fight at the bargaining table will be that much harder. 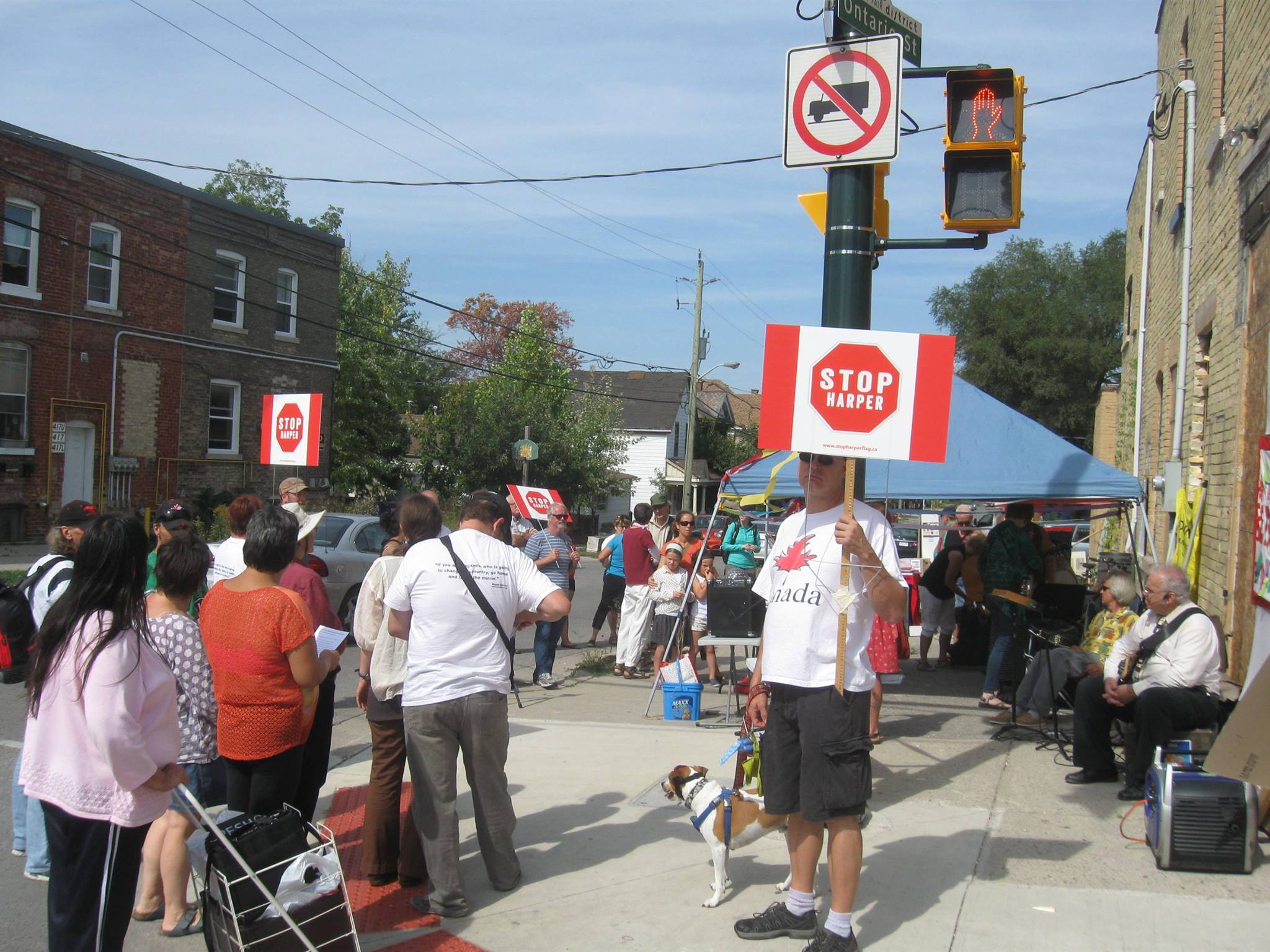 The next day, we headed to London, Ontario to focus on the Conservative swing seats in play. We attended a Stop Harper rally organized by the Council of Canadians and had a meeting with Patti Dalton, the president of the District and Labour Council. At the rally, we sang the Harperman song including our two verses on the postal cuts that were written by members of Londoners4Door2Door:

Loss of jobs, self-serve mail, putting our post office up for sale

Harperman it’s time for you to go!

If he privatizes Canada Post, our door to door will sure be toast

Harperman, it’s time for you to go! 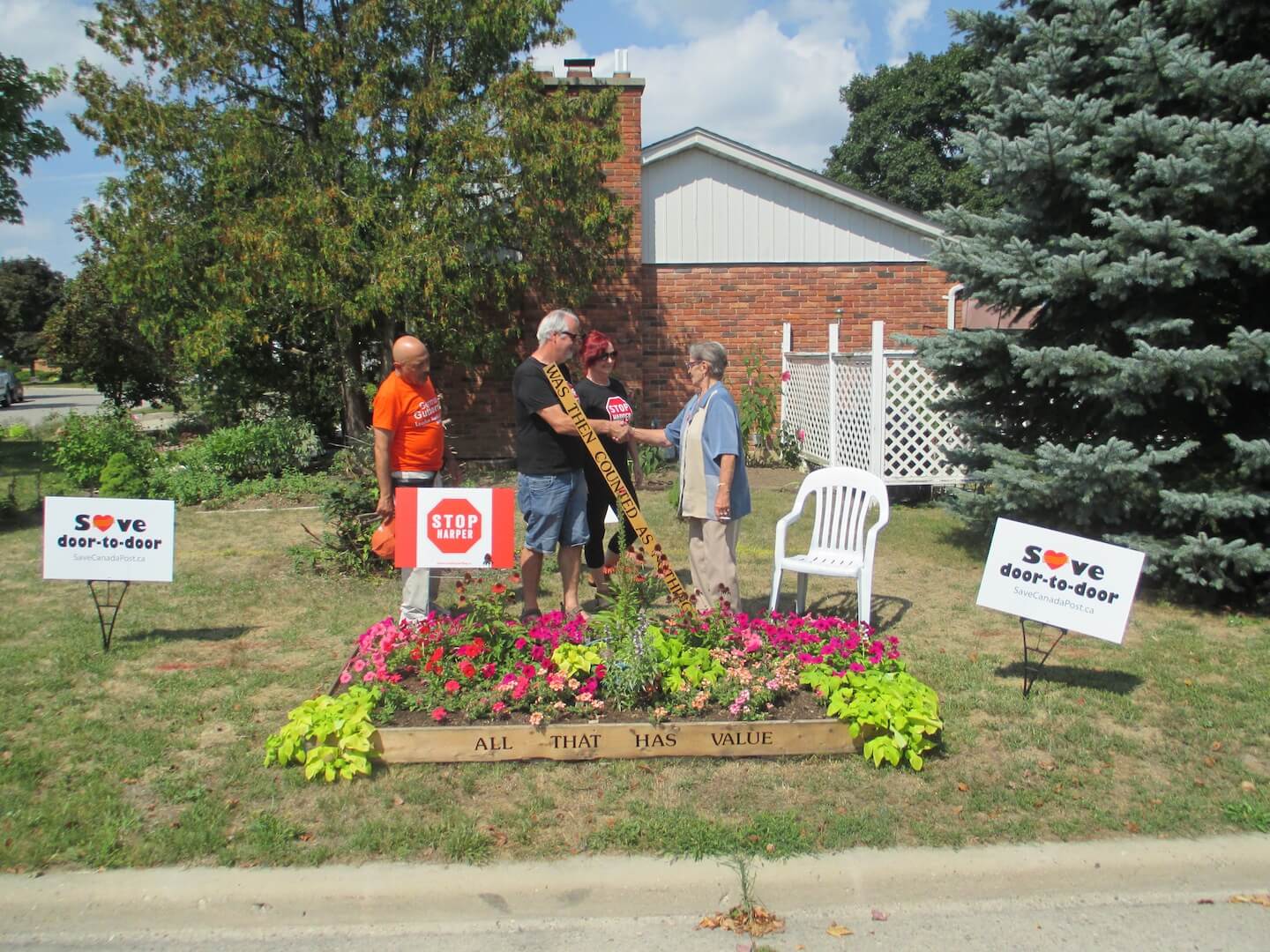 In London, there are multiple garden boxes, art installations and occupation sites. Some of these have endured for months now. We made sure to stop by and mark one site’s 62nd day of successfully blocking the mailbox from being installed. We also canvassed, as volunteers, with postal workers for NDP candidate Herman Gutierrez. 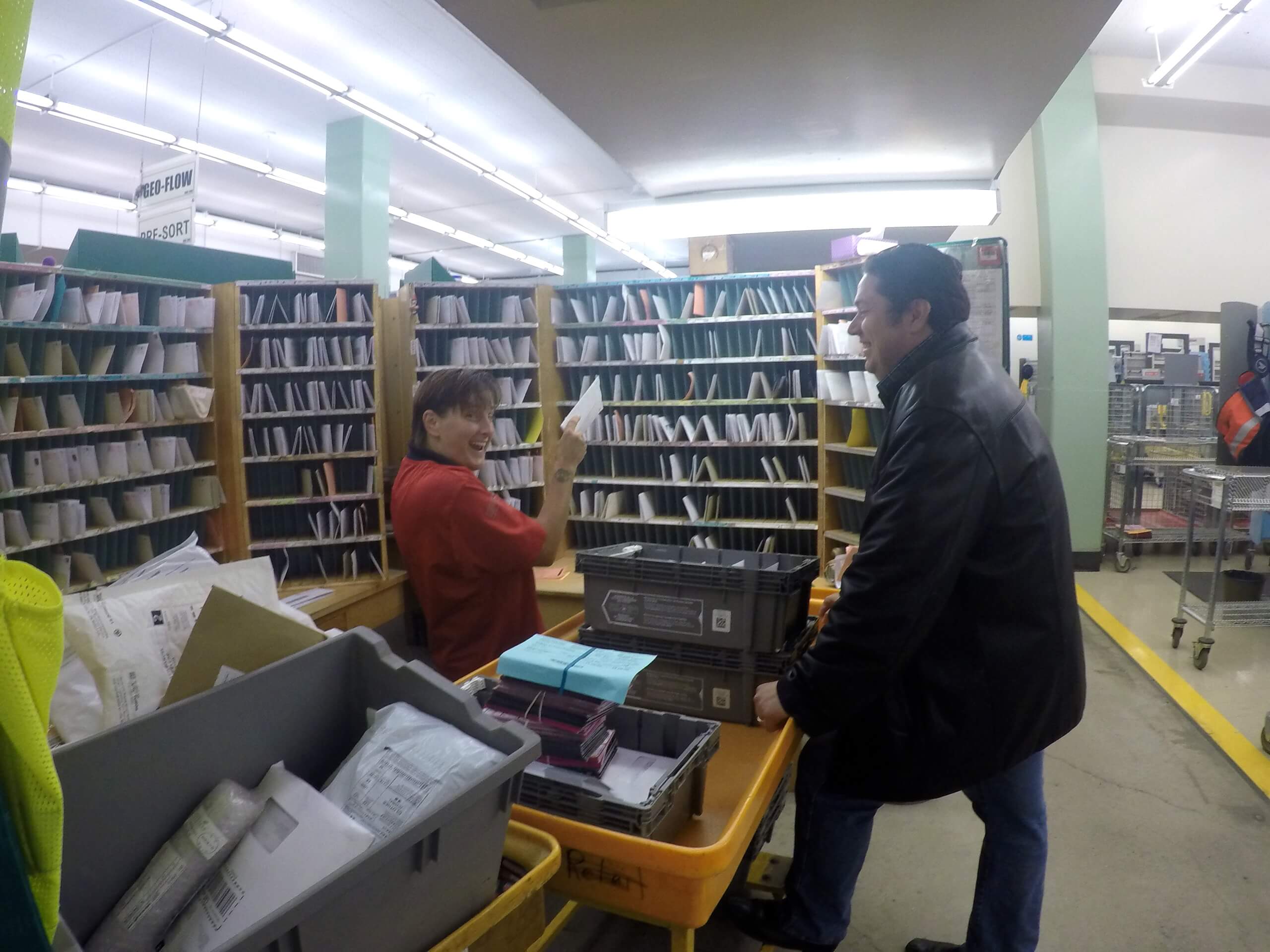 Throughout, we have been visiting workfloors and talking to members, sometimes one-on-one, sometimes in larger meetings. At these meetings, we talk about the importance of the election for our jobs and the communities we serve. We discuss the upcoming negotiations and encourage members to get out and vote in the ratification meetings now taking place across the country. There is a lot going on and it’s hard to make the time to participate given busy workloads and family responsibilities. Our members are overburdened and stressed everywhere and this situation is completely unsustainable. We need to make some changes to improve our working conditions and our lives. 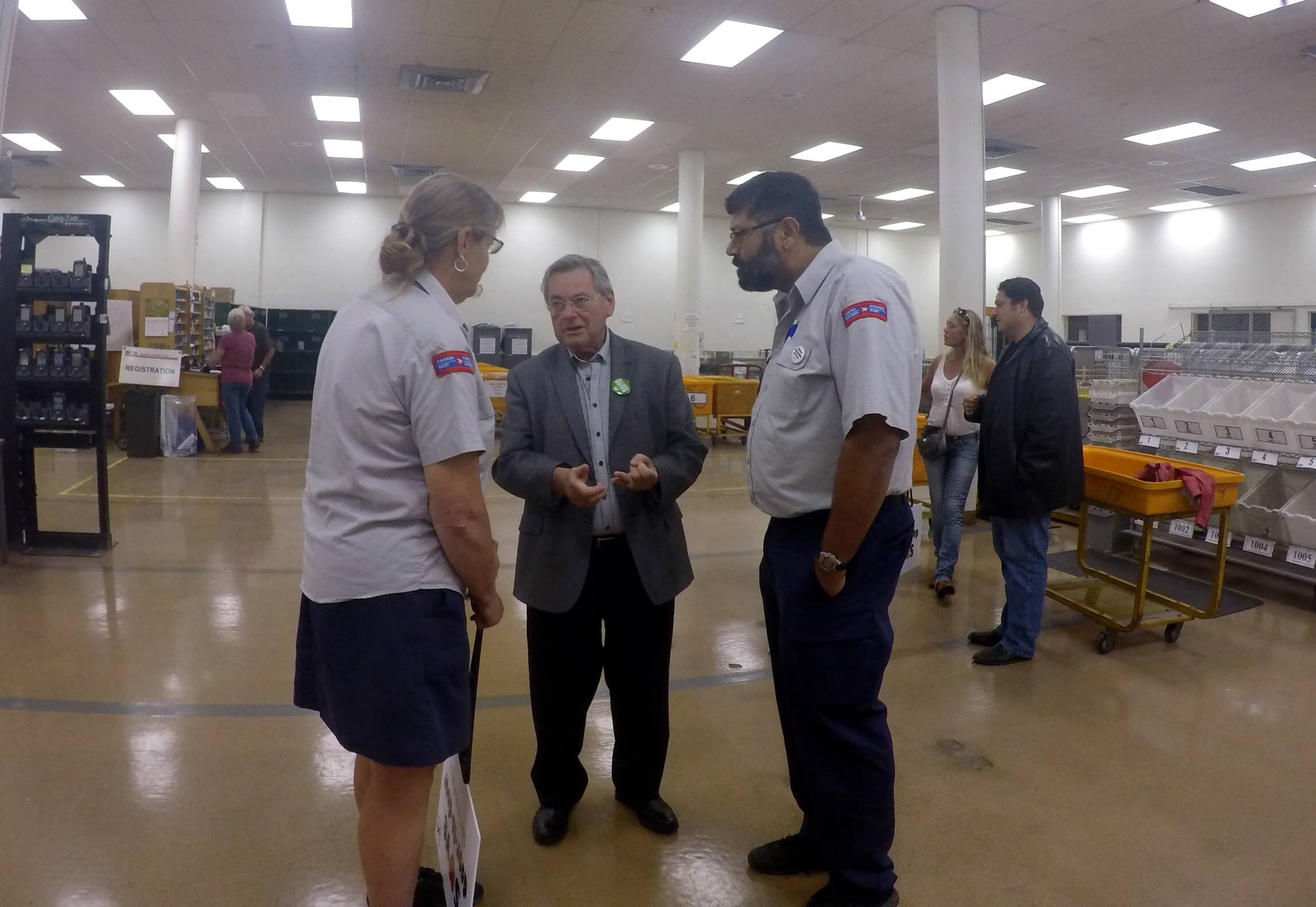 Brother Jean-Claude Parrot, our legendary former National President, joined the tour for London, Stratford and Kitchener. Our first stop was the London plant, where management initially attempted to deny us access to the workfloor. After a showdown, we went in and held a meeting with all members present. Brother Parrot talked about the attack on our pensions as the moment he knew he had to come out of retirement and help lead the fight. On every work floor he visited, he explained how all the attacks we are facing now, from the pension to the cuts in service, are part of the plan to prepare Canada Post for privatization. 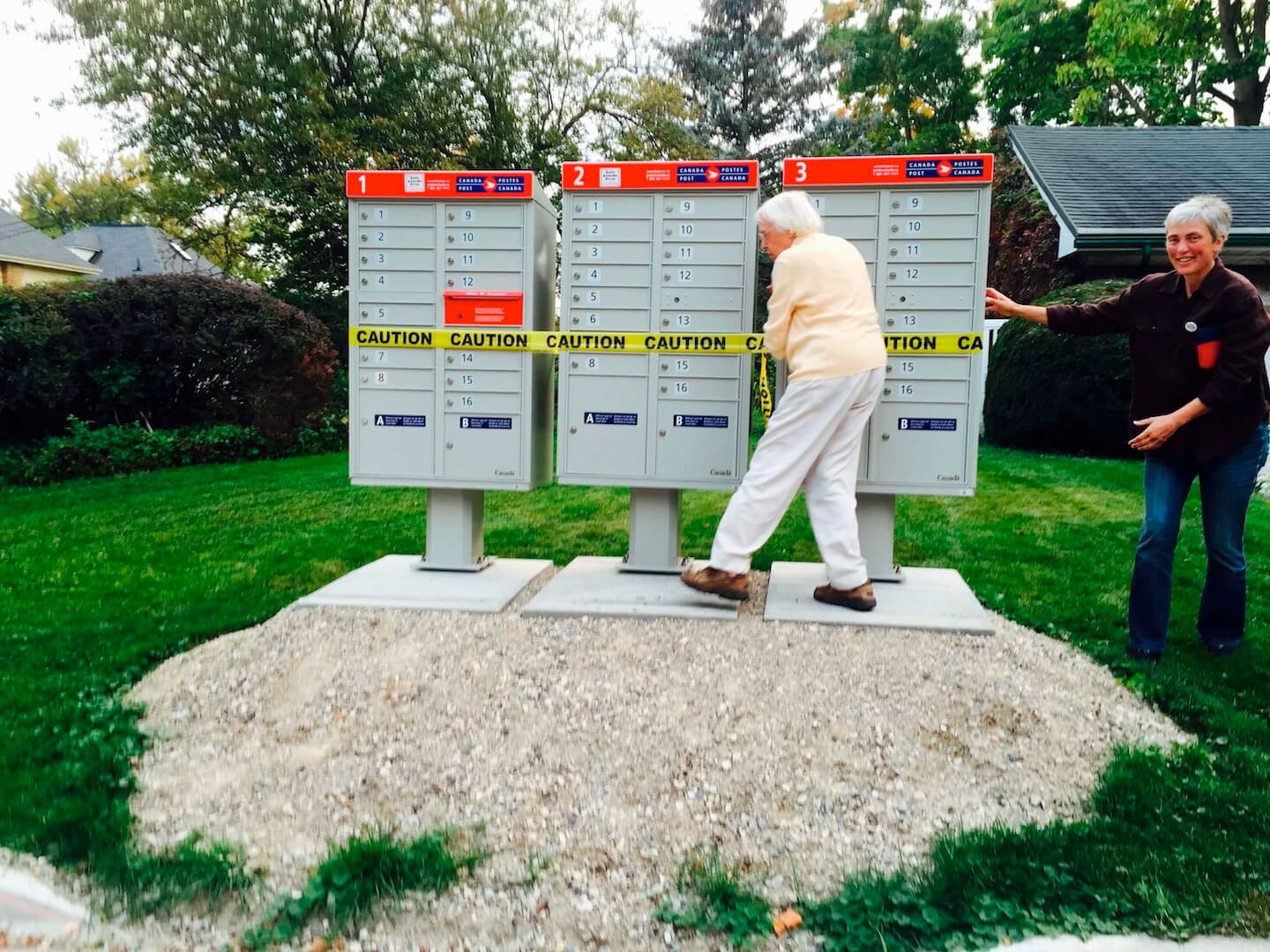 In Stratford, after meeting members at the post office, the Local took us to a truly outrageous CMB installation where a senior living nearby demonstrated how dangerous it would be to retrieve her mail. There are at least 40 such locations documented so far in Stratford, many of which members are refusing to deliver to and continue to deliver to the door. We also stopped by City Council, where we thanked the Mayor and Council for their support of our Save Canada Post campaign.  Over dinner, we had a question-and-answer session with local activists. 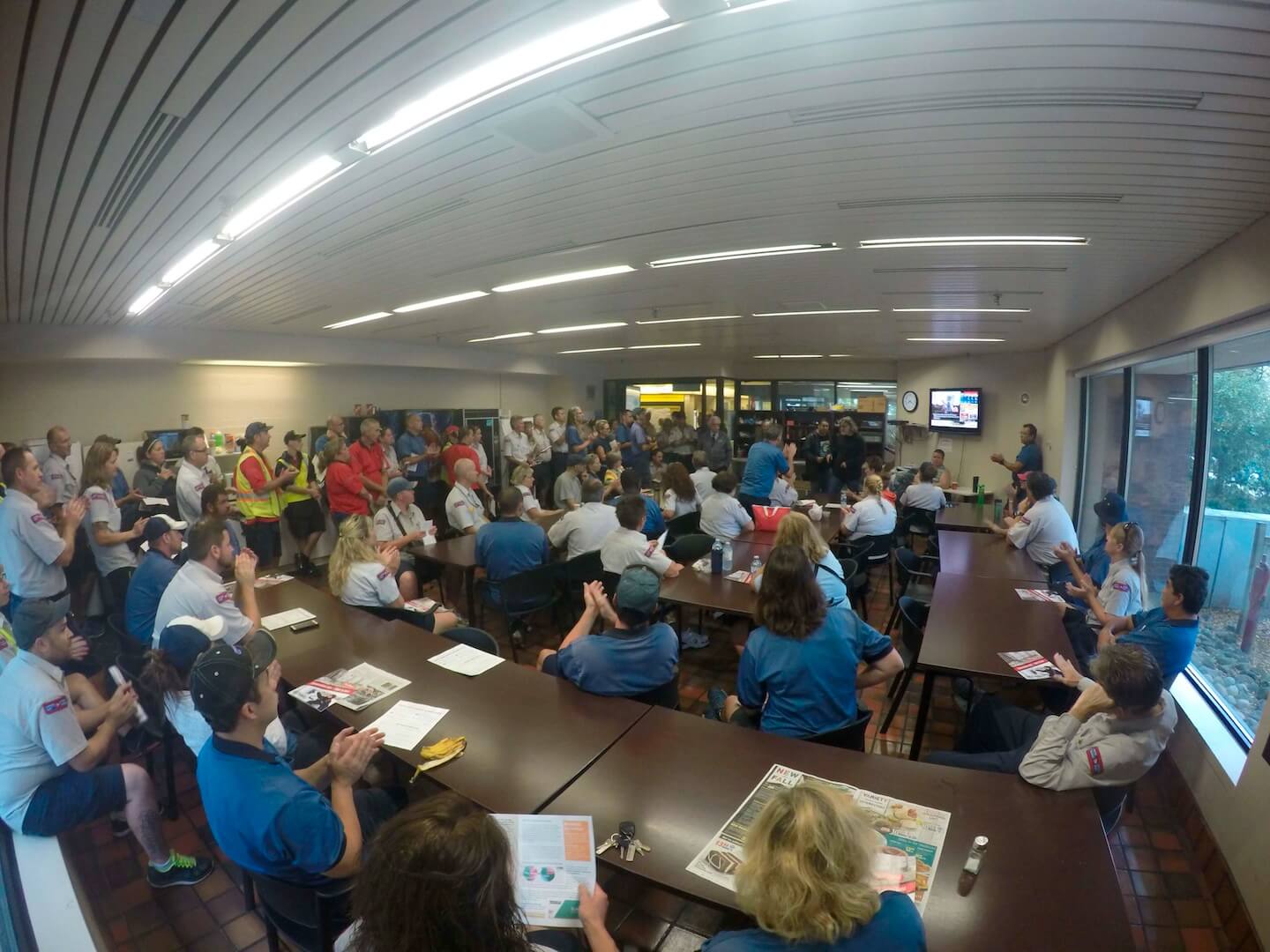 The next day, we headed to Kitchener for a packed workfloor meeting. It was standing room only and people spilled into the hallways. Unfortunately, management created similar problems to London in vainly trying to deny us access to the workfloor, which meant that few members were left in the Cambridge/Galt post office, which was our next stop. We were still able to speak with a few members, urban and RSMCs. During the afternoon, we had meetings with three NDP candidates and then volunteered to drop some flyers that evening at Kitchener residences in a potential swing seat riding before heading to Niagara Falls. 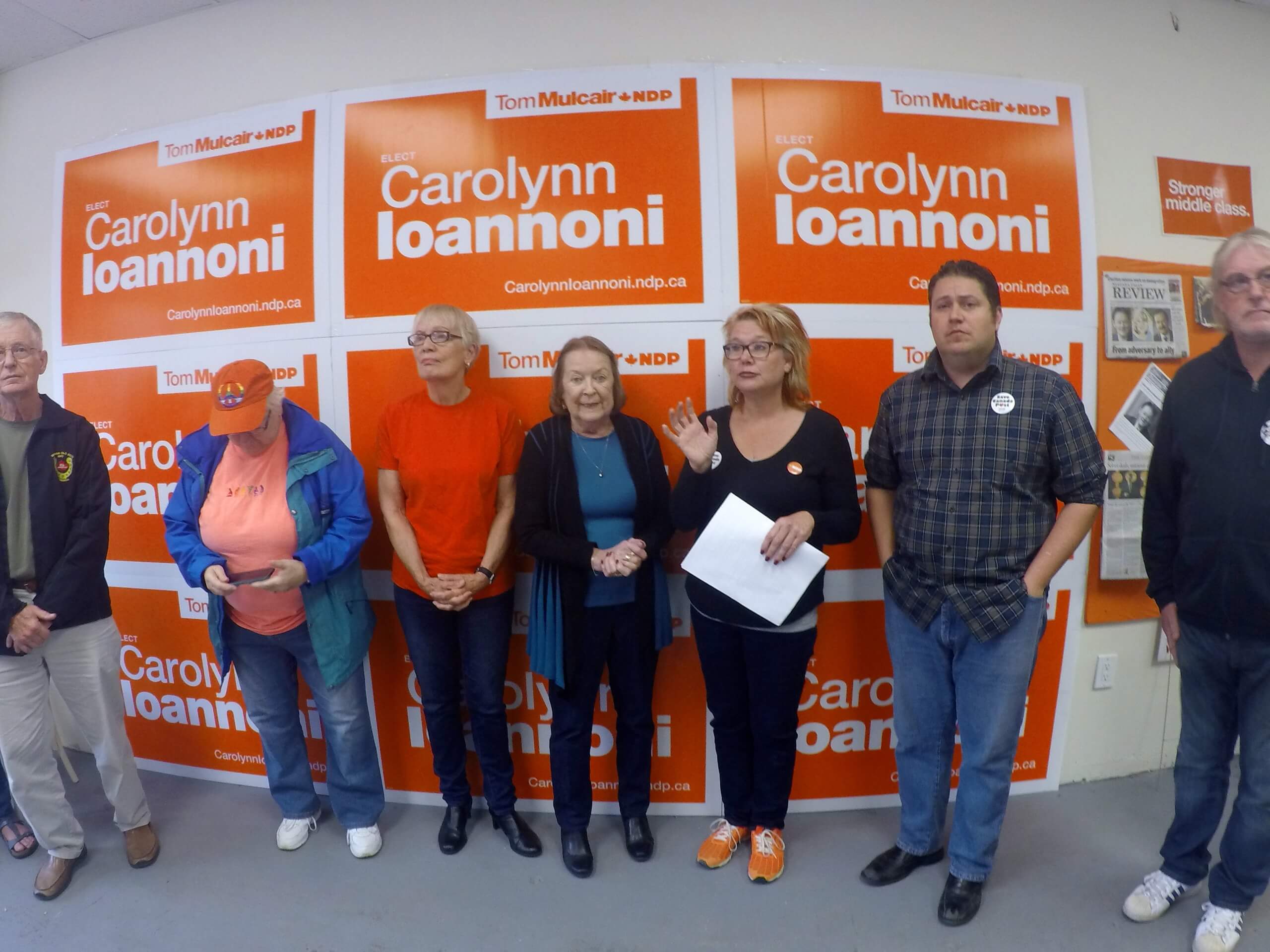 In Niagara Falls, we visited the workfloor and then had a media conference with Carolyn Ionnani, NDP candidate, who brought together many seniors from the community to talk about the effect of the cuts on their lives. We heard from women and men suffering from chronic illness and disability who spoke movingly about the burden that the loss of their home delivery would impose.

In the days to come, we will be continuing to tour Southern Ontario and Quebec.  Stay posted!