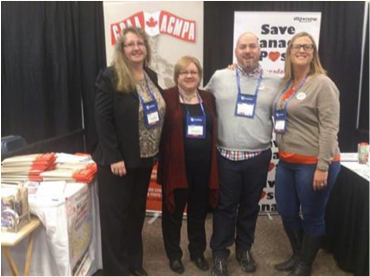 On February 2 and 3, CUPW and the CPAA jointly attended the annual meeting of the Saskatchewan Urban Municipalities Association. Although door-to-door mail delivery is not as extensive in Saskatchewan, we were able to convince city mayors and councillors of the need to oppose Canada Post’s five-point plan. CUPW’s kiosk was probably the busiest there. We collected over 200 signatures for our petition. Interestingly, Canada Post had a stand not far from ours. It featured their new CMB and attracted only a few dozen people. Municipalities are increasingly concerned about the costs they will have to incur as a result of the CMB conversion and about the poor service their residents are receiving.