This bulletin updates you on our campaign RV, which rolled from Edmonton into Red Deer, Calgary and Lethbridge, Alberta, and then Cranbrook, Creston, Nelson, Grand Forks, Penticton, Kelowna and Mission, BC, before heading to Vancouver Island. In Mission, we were joined by retired Brother Ed Nicholles, and thanks to all who have stepped up to crew and welcome the tour.

Everywhere we go, we are seeing incredible public support and solidarity from postal workers and allies. Canadians are not impressed with the cuts to their services. We’ve got the Conservatives on the run.

The tour schedule has been non-stop and gruelling, leaving very little time to write up bulletins, but we are also using social media to get the word out. You can follow us on Facebook (CUPWSTTP) and on Twitter @cupw and @sttp. You can also see blog posts and more pictures on our website at savecanadapost.ca.

In Edmonton, we were glad to be joined on the caravan by Sister Kathleen Mpulubusi the route verification officer of the Edmonton Local. We then headed for Red Deer for our plant floor meeting. 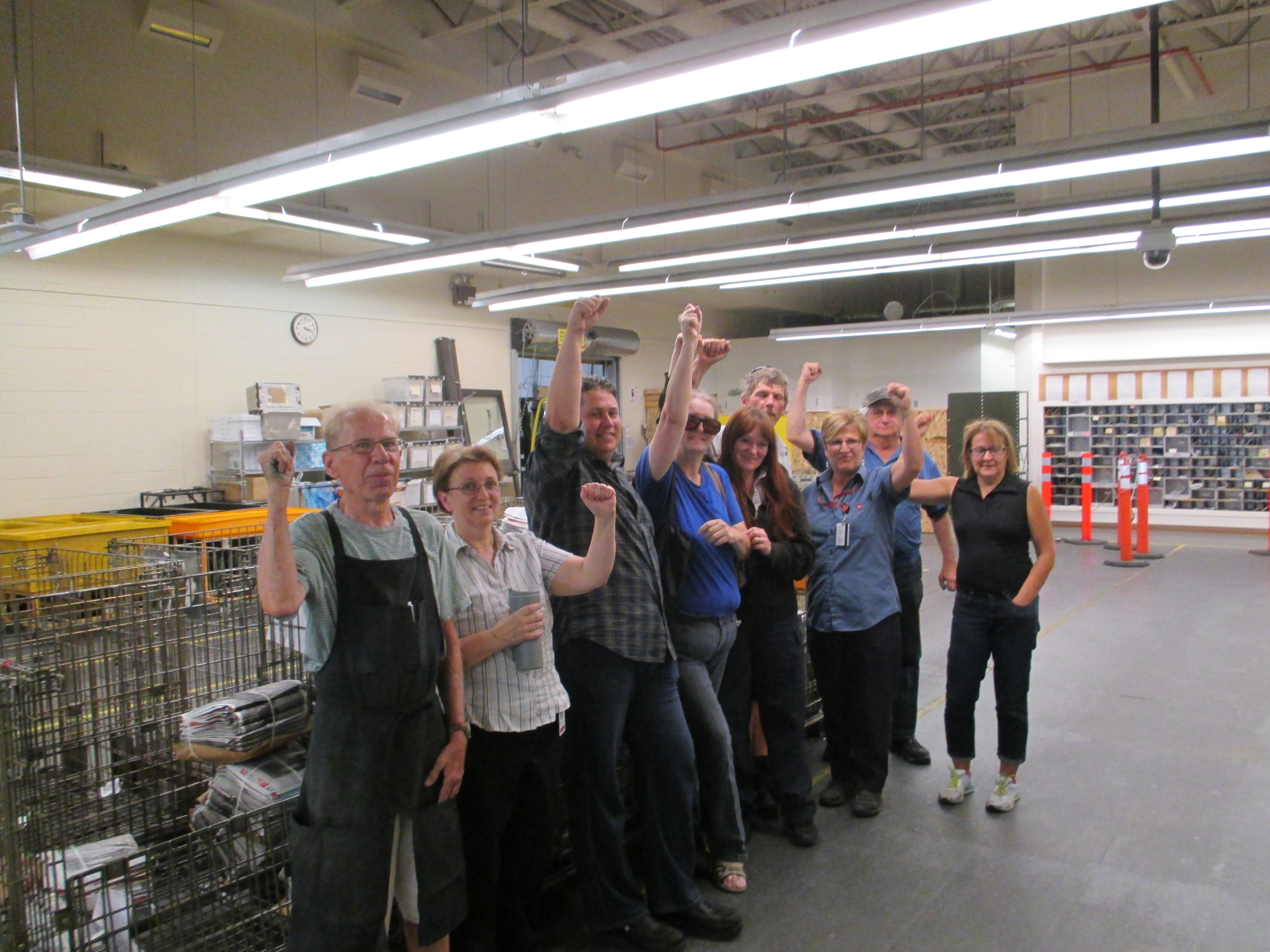 August 14th in Calgary, we stopped at the plant and, of course, at the Harper Constituency office for a morning demonstration organized by the Calgary Labour Council and CUPW. We got lots of media attention! 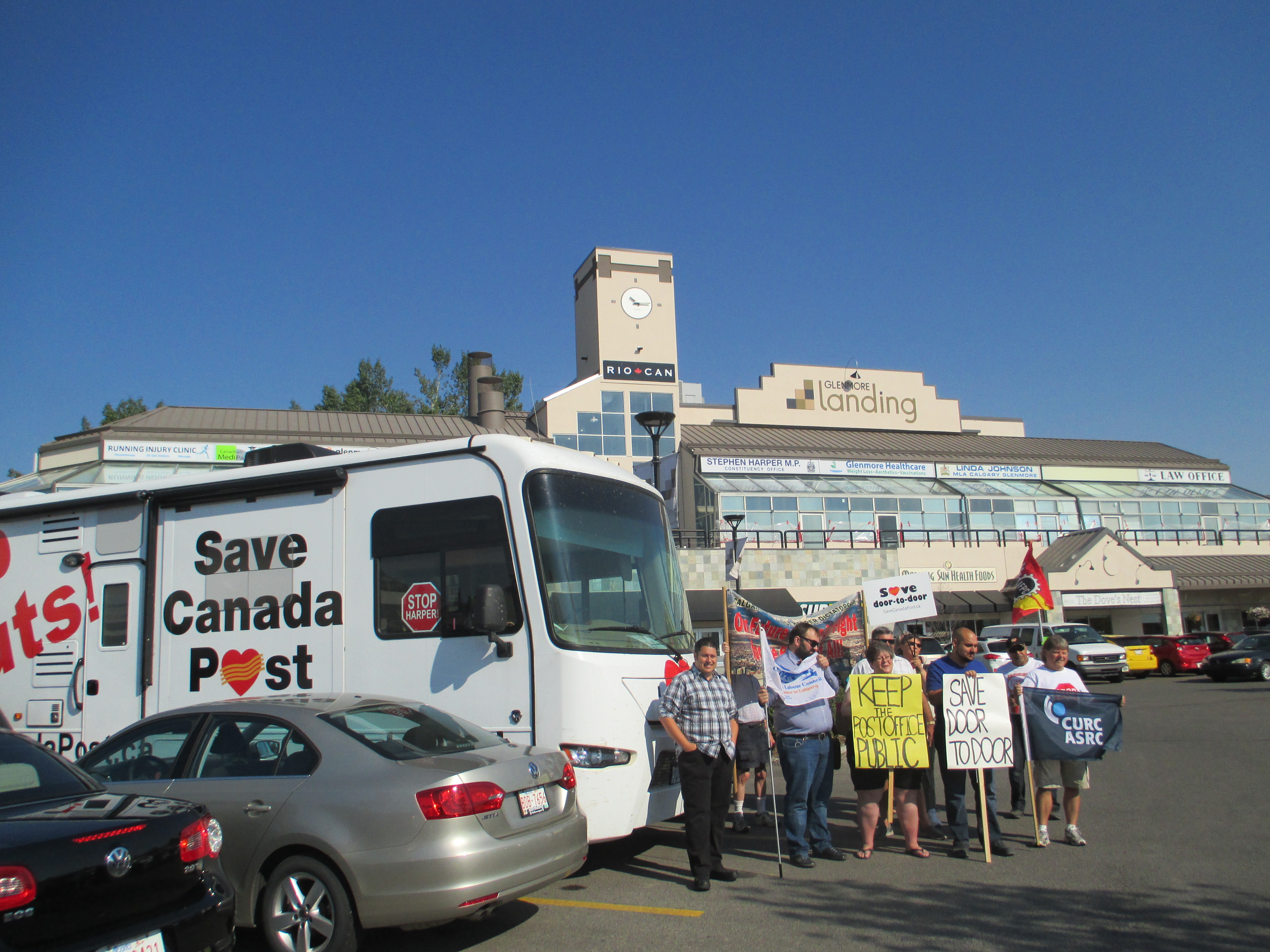 At the Farmers Market in Lethbridge, we parked right beside the entrance for maximum exposure. We also made our way over to the main post office to meet with the local members and retirees. We were later invited to hand out our material in the local “Electric in the Park” event. 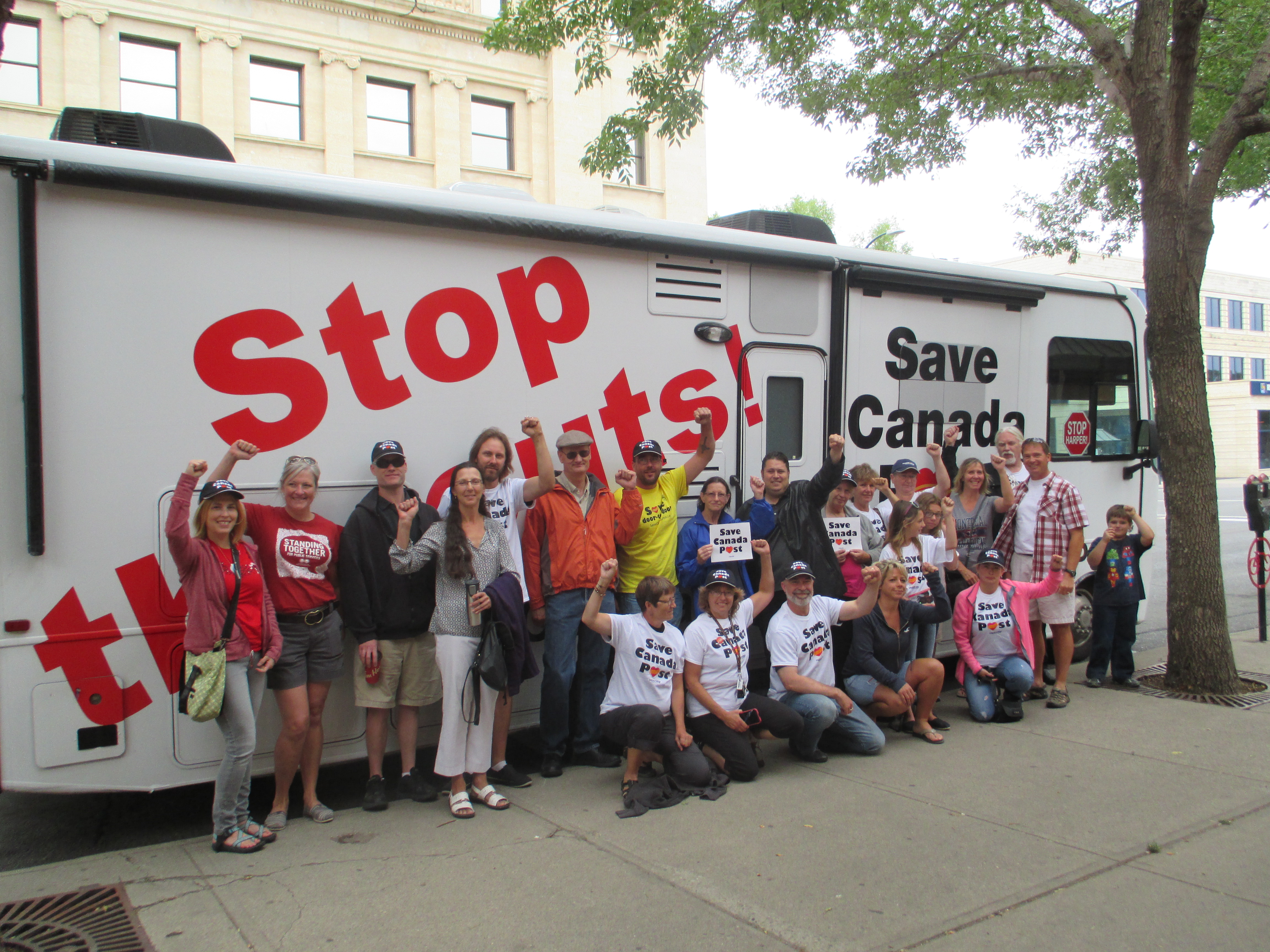 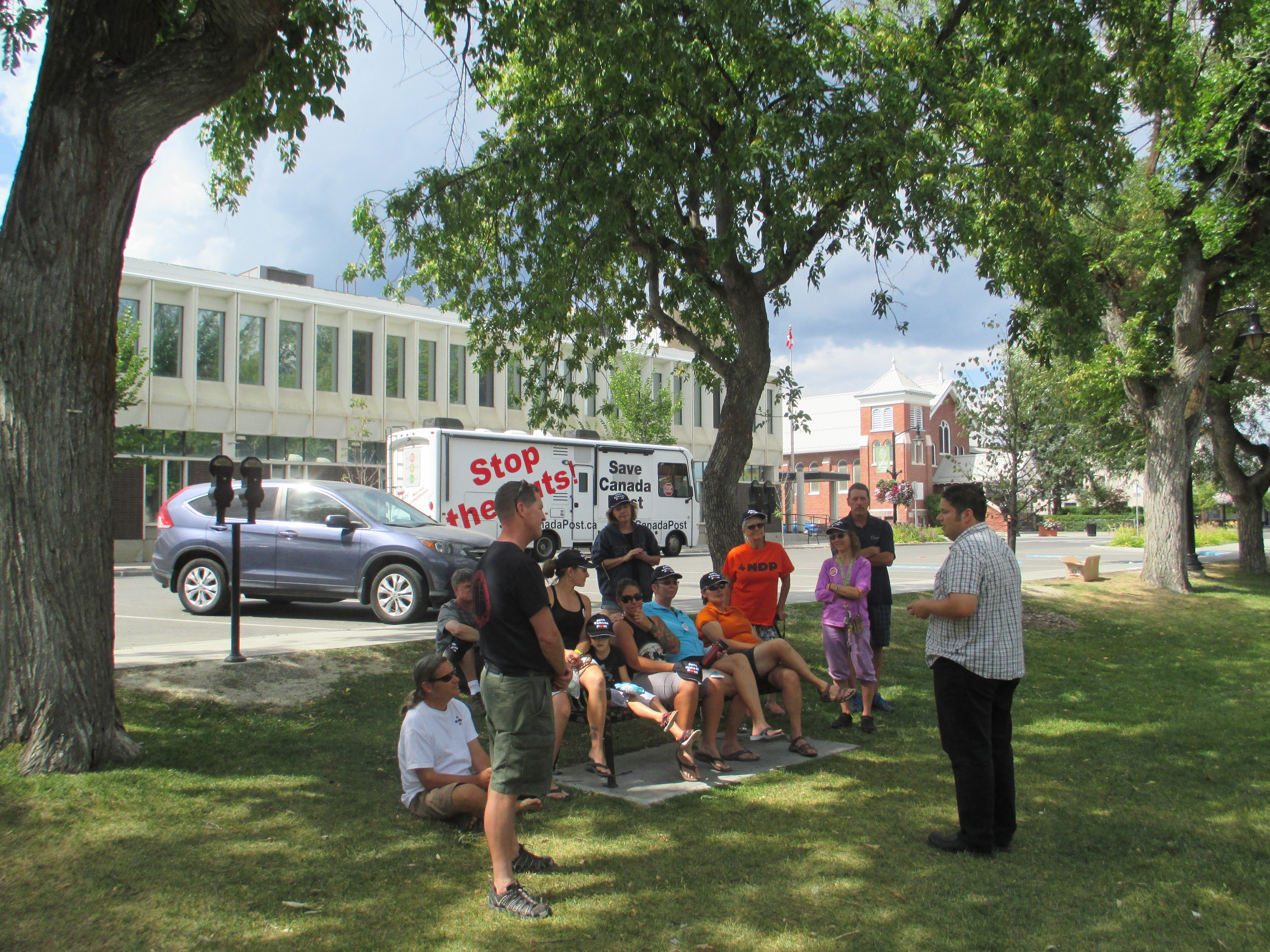 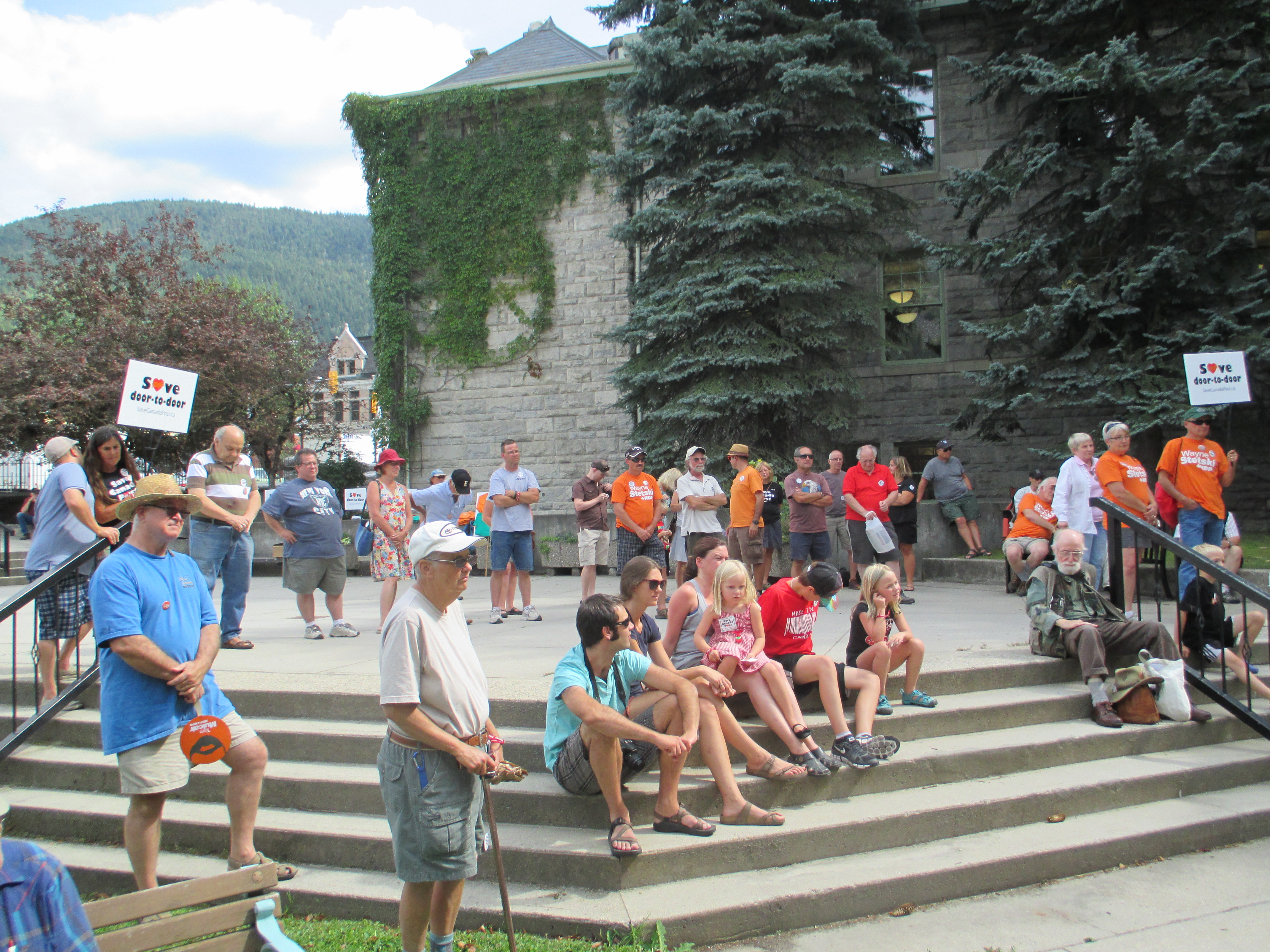 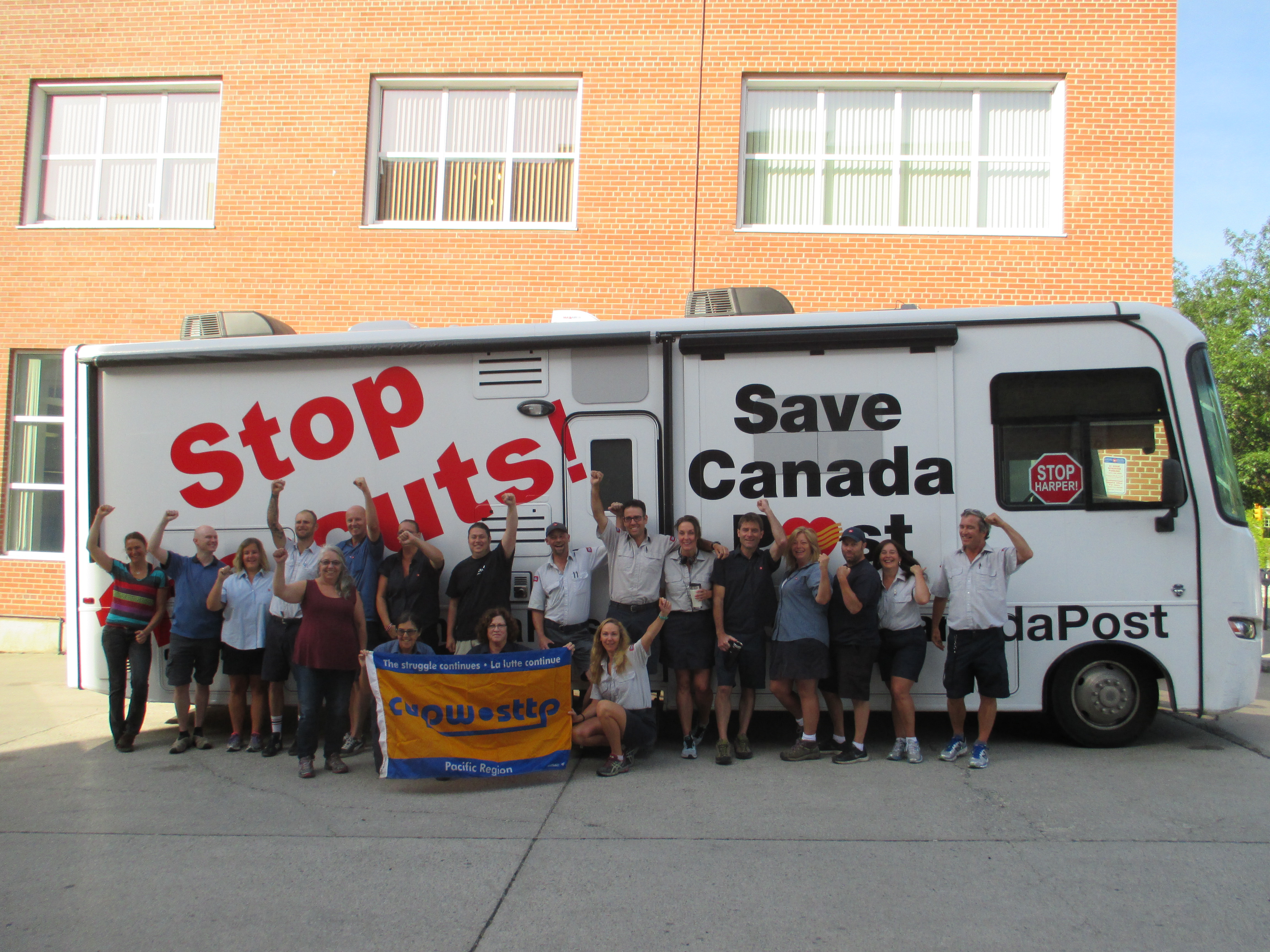 We stopped in at Castlegar and Grand Forks on the way to Penticton. 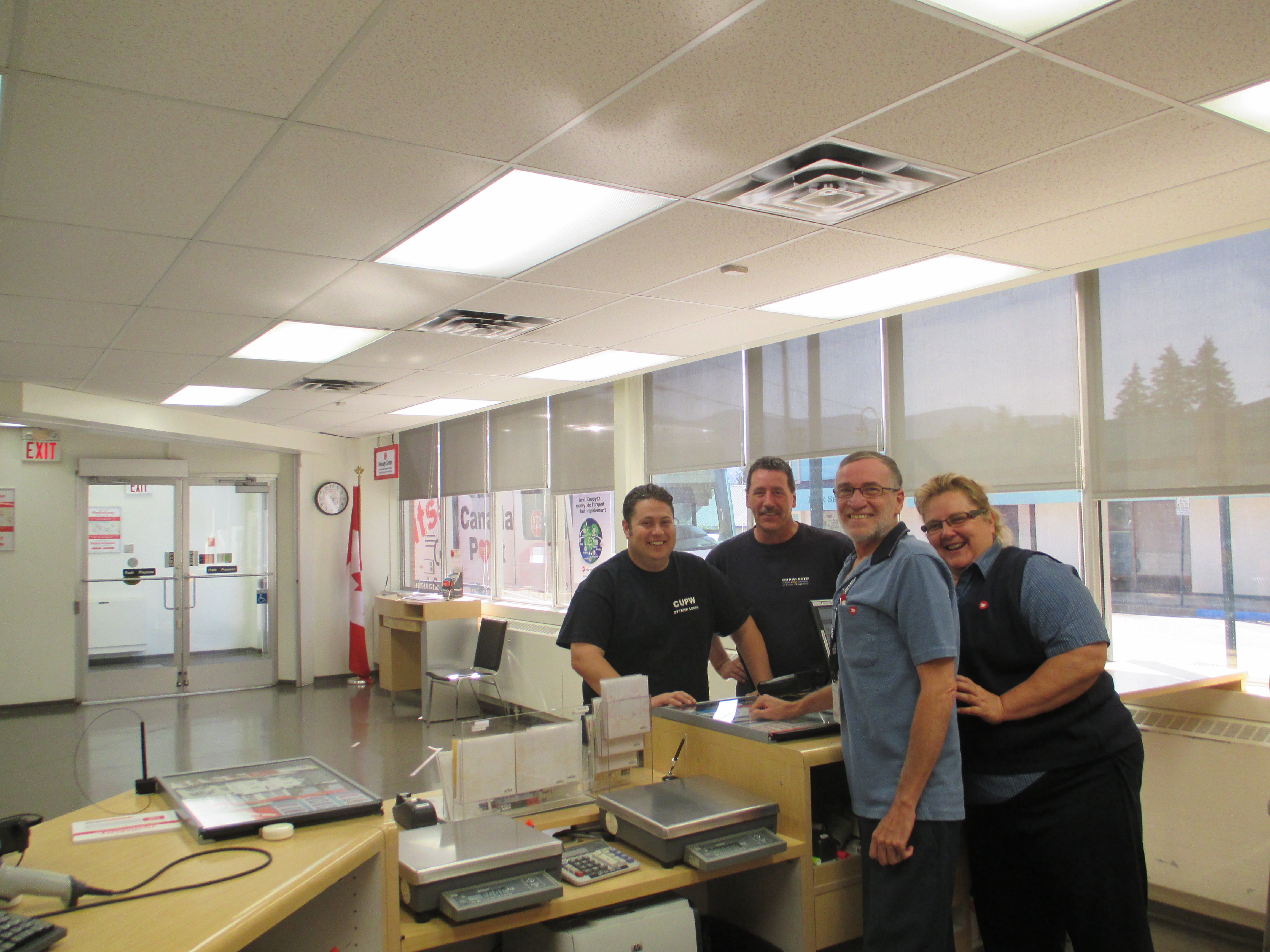 When we arrived in Penticton, dodging wildfires en route, the Local had set up a picnic in the park. We also did a shopfloor meeting the following day. 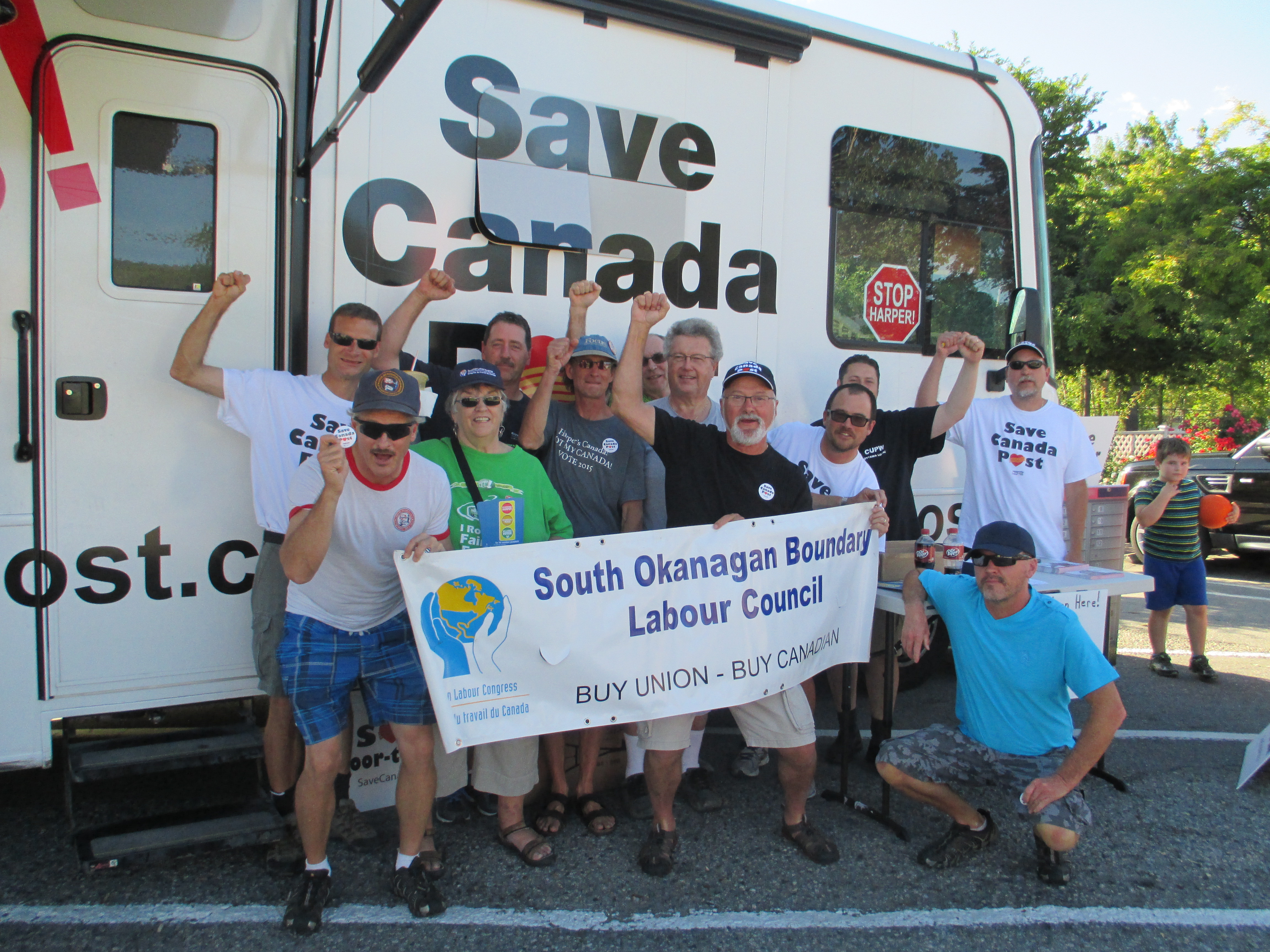 In Kelowna, a rally was held at the Conservative constituency office in the Capri Hotel Centre. All the local candidates were invited to the event but only the two NDP candidates showed up. 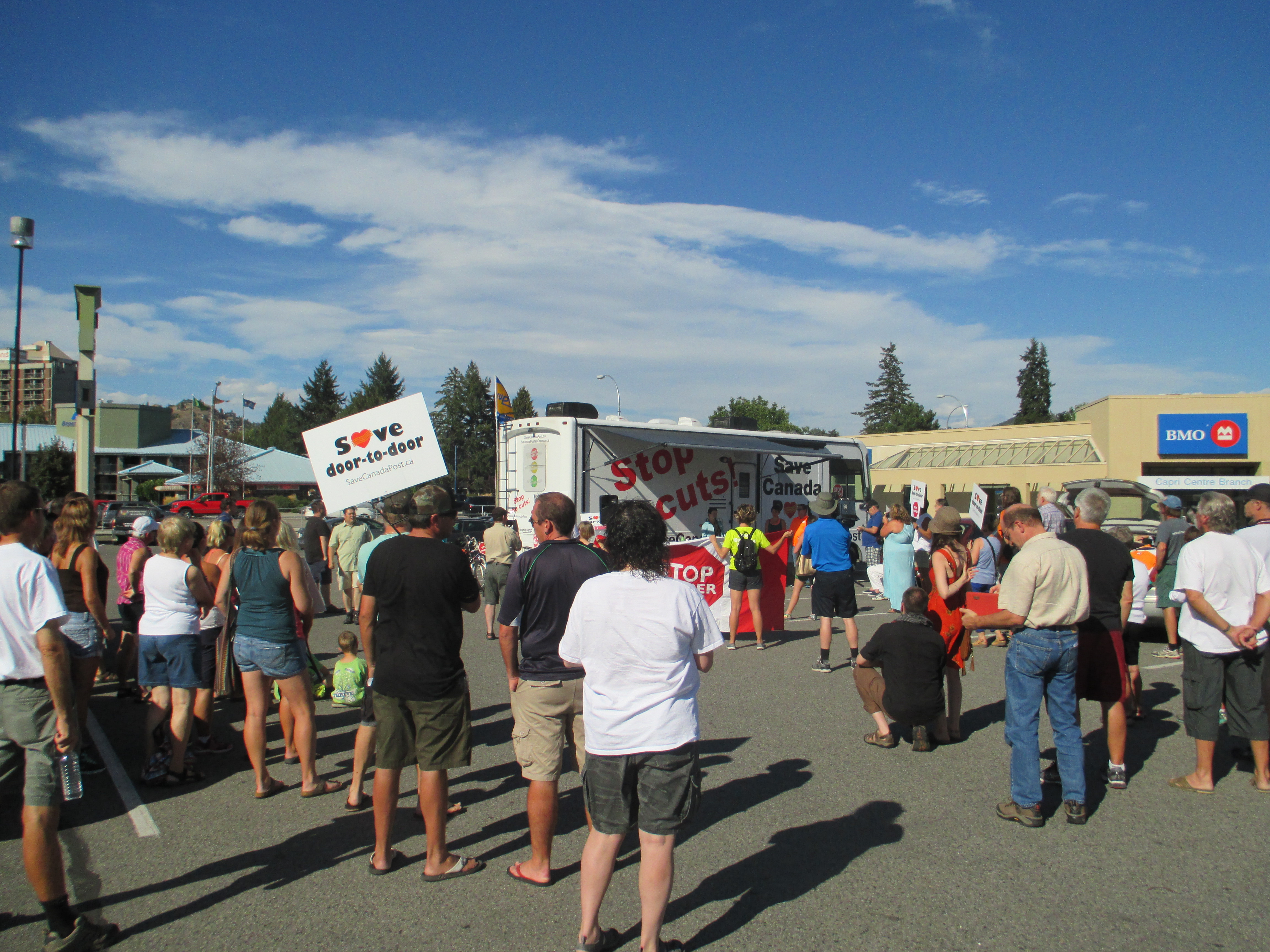 In Mission B.C., Local President Kerisma Vere and her executive prepared a BBQ in front of the main post office. Postal workers and supporters marched through the streets of Mission. 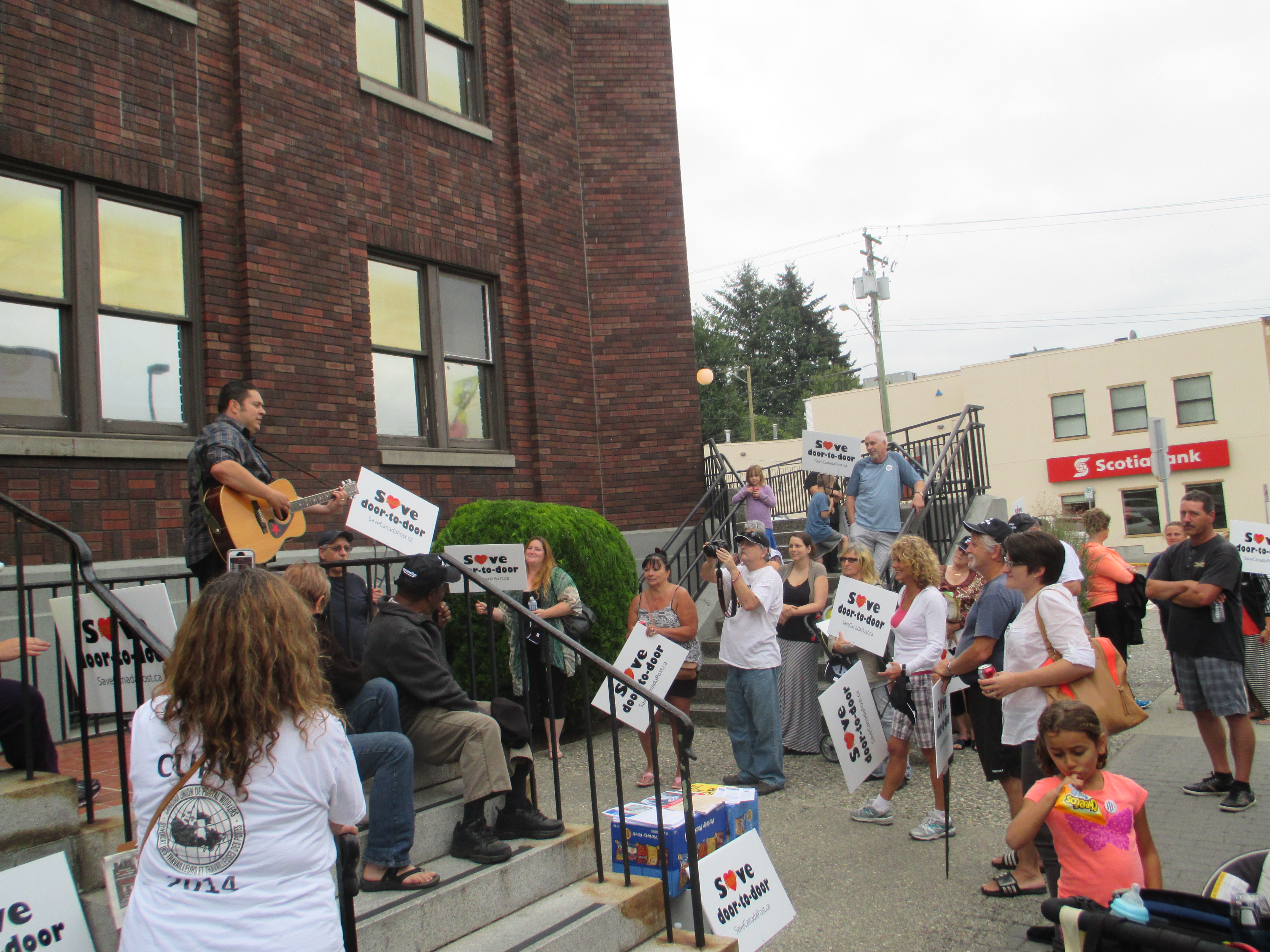 After Mission, the Tour went to the Fraser Valley West Local and Vancouver Island, which will be covered by the next bulletin. Don’t forget to follow the tour on social media!