On International Women’s Day, We Call for an End to Discrimination and Sexism 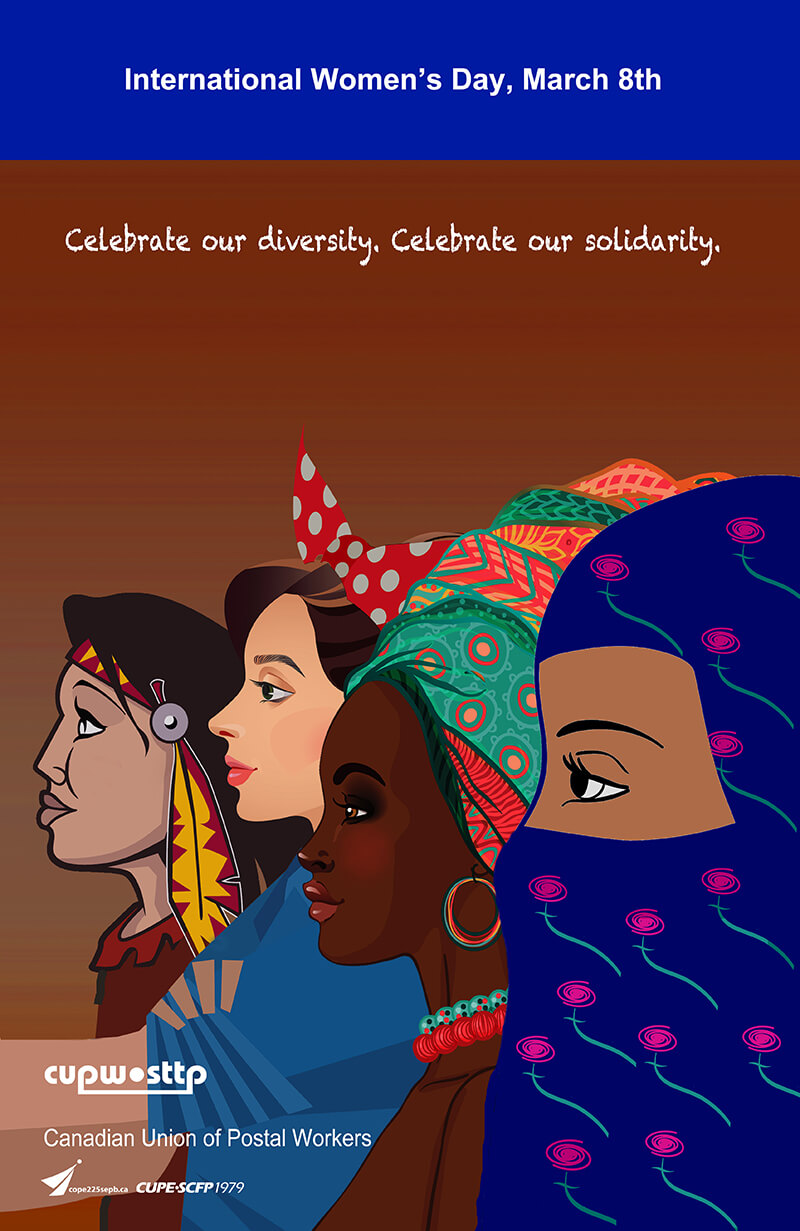 In honour of International Women’s Day 2018, the Canadian Union of Postal Workers (CUPW) created a poster, showcasing the diverse women who make up of the fabric of our society and how together, we will fight to bring change and equality for all women. We know this is a tall order as women’s rights continue to be threatened on many fronts. However, it is more important than ever for us to stand‐up and stand together against blatant discrimination and sexism. We cannot sit quietly while society and the justice system repeatedly fail Indigenous women like Tina Fontaine.

While women, especially racialized women, face higher risks of gender‐based violence, we also continue to be underrepresented in politics and in leadership roles, and are the major caregivers in our families, which can negatively impact our financial security.

Women in the workforce tend to be paid less than men, and this is true at Canada Post. We have recently entered arbitration hearings in an effort to end the wage gap between the urban mail carriers and the predominantly female RSMCs, who earn approximately 25 percent less than their mostly male counterparts. We also face higher rates of discrimination and sexism, sometimes in the form of legislation, such as Bill 62 in Quebec which disproportionally affects Muslim women who wear face coverings, making public spaces more hostile to them and restricting their independence.

It’s been three years since our Prime Minister famously said of his decision to staff half of his Cabinet with women, “Because it’s 2015,” and yet women around the world, especially racialized women, continue to be bullied by governments and legislation that don’t take into account their experience and their rights. We’re calling for all political parties to detail and debate their platform commitments to ending women’s economic inequality, ending violence against women, and supporting women’s leadership and organizations.

At CUPW, we have, and will continue to address these and other gender and equality issues, and are working on solutions to make the postal service, the union and our whole society more inclusive. We continue to fight for pay equity, universal childcare so women can participate fully in the workforce and a safe, inclusive and equitable environment for women and trans workers. We will not stop until we achieve equality for everyone!

Women will no longer be quiet. We are seeing young women, in particular, racialized women leading movements to fight against hate, racism and sexism. The road may be long, but women are rising. This year, on International Women’s Day, we stand with all our sisters, and vow to continue to fight for an end discrimination and for equality for all.