We met with the mediators today and reviewed the current state of our negotiations with Canada Post and the lack of real progress.

In our meeting with CPC today we discussed Health and Safety Training (Appendix DD). CPC is still determined to reduce the 8 hours of health and safety training that every employee receives even though the injury rate at CPC is the highest in the federal public sector.

Every round of bargaining involves many issues that are connected to health and safety. This year is no exception. One thing that is new is the report from Labour Canada that reveals that Canada Post Corporation, once again, has the highest rate of disabling injuries in the Federal Sector. As seen below, Canada Post now has an annual rate of disabling injuries of seven per 100 full-time employees. This is 64% higher than the second most dangerous sector, Long Shoring, and almost four times the average for all industries covered by the federal jurisdiction.

Since Canada Post changed its reporting practices for injuries in 2011, it is possible that the Corporation’s claims of injury reduction during 2011-2014 were false. However, even if the Corporation has been submitting inaccurate information to Labour Canada, there is no doubting that CPC remains a dangerous place to work. That is why the need for training, healthy shift schedules and safe work practices are a major concern of the negotiating committee. 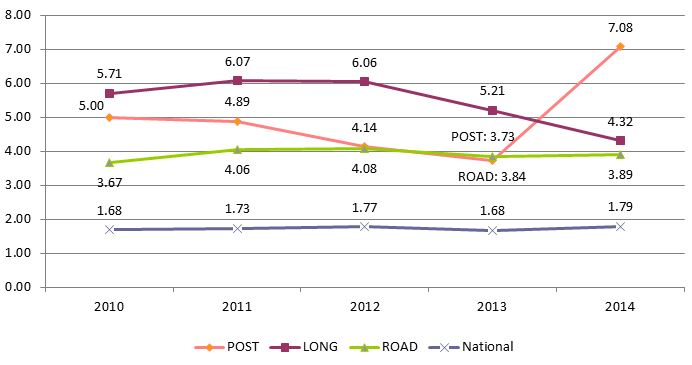 The parties also discussed Group 3 & 4 (Tech Services) weekend work. We presented language on sorting sequenced mail into the case to allow letter carriers to safely deliver mail using the one-bundle delivery method. CPC did not respond at this time.

The parties will continue to meet over the weekend in an effort to make some real progress at the table. We will keep you posted.