Feb 24 to Mar 6
National Board of Trustees 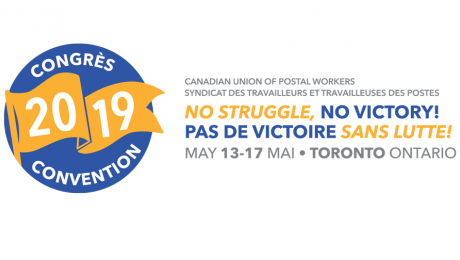 Court Challenge Launched Against the Elimination of Door-to-Door Delivery

Not Always Our Best Friend

Report of the National Executive Board (2011)

Minutes of the 2011 National Convention

Well-Being at Work Survey Deadline has been Extended

A PhD candidate at the University of Quebec in Montreal is studying mental health in the workplace, with a focus on postal workers. The findings will benefit workers generally, and CUPW specifically. In general, studying stresses and mental health effects will help address risk factors for mental health issues, and mitigate and treat the effects. CUPW will learn more about workplace stress and its mental health impact from the project’s final report.

Day 8 of the arbitration started with the cross examination of letter carrier and negotiating committee member, Stephen Gale. The next witness was Roland Dandy, a letter carrier from Hamilton, ON. Roland testified about having to work overtime on his route almost every day. He attributed this to heavy volumes of parcels and the preparation and delivery of neighbourhood mail. There will be testimony from two experts on one bundle delivery and percentage of coverage.

International Day for the Elimination of Racial Discrimination

In 1966, the United Nations General Assembly proclaimed March 21st as the International Day for the Elimination of Racial Discrimination. The UN Assembly called on the international community to strengthen its efforts to eliminate all forms of racial discrimination.

The massacre of worshippers at two mosques in Christchurch, New Zealand today, has been described by the country's police commissioner as an "unpre

Fridays for Future: Our Children are Standing Up for Us, Let’s Stand with Them

Children are required to attend school.

Let’s Stop JNF Canada and Take Away its Charitable Status: Sign the Petition to the Ministry of Revenue

Union Delegation to May Day Activities in Cuba April 28 to May 4, 2019

The National Executive Board has adopted the following resolution:

Please note that the deadline for applications to Labour College is March 31, 2019 - Are you committed to building stronger and broader labour and social justice movements? Do you want a better understanding of the forces that shape workers’ lives? Do you want to be part of an activist network, and build up your research and strategic planning skills? Are you an activist with a demonstrated commitment to playing a leadership role in your union and building the labour movement for the future?

The Union has lost another fighter; comrade; brother. Dave Stutt, a tireless advocate and activist who stood up for his fellow sisters and brothers throughout his career, has passed.